I emailed Jon. "Not giving up! Heading: Canary islands. Have hand-held GPS and a large scale planning chart. Fuel: unknown. Making for the deep Atlantic to play it safe. Routing advice: much appreciated."

The transceiver found a satellite and sent the message.

[Image 34-1] Balanced on the boom, Meg re-rigs part of the flying mainsail. Strait of Gibraltar.

Ahead, the Atlantic opened up before us. Behind us the great rock of Gibraltar slowly dissolved into a greasy layer of smog. A cold headwind, dead on our nose, funnelled through the Strait, making it almost impossible not to turn back into the gentle Mediterranean. Drift. Wait and hope for something to go right. Even the current was against us. Evaporation exceeds freshwater inflow into the Mediterranean basin. Plug the strait of Gibraltar, and the Med would become a gigantic Death Valley.

"There's wind. We ought to save what's left of the petrol." I said.

She stared at wildly spinning, monster wind generators jutting from the hillsides. "What do you want me to say, Meg? What good is fuel if we can't start the motor?"

"Then, what difference does it make? Another hour or two of engine time, at this point, won't make or break our survival." I took the wheel.

Elena raised the sails. Handling the huge Dacron wings was nothing for her by then. Recalling the test drive back in Marmaris, her transition was remarkable. I yanked the fuel shut-off. The motor died. The sails caught and bent wind. After more than a week of the motor's incessant, brain-eating drone, the relative tranquillity was startling.

It took hours of zigzagging into the wind to leave the Strait and its endless column of ships. The sun was low on the horizon. We were losing solar power by the minute. Still, there was nothing from Jon.

Elena hates sunsets at sea. It's not the night itself that gets to her, but the unstoppable loss of light. When it's actually night, and can't get any darker, it's like there's nothing left to lose: things can't get worse. She sent me below. Told me to get some sleep and spell her off later.

I poured a couple of fingers of scotch and wedged myself into the bunk. It could have been the whisky, but for the very first time in my life, I was feeling the ocean swell and fall; coming to life beneath our tiny, broken sailboat.

[Image 34-2] Boadicea heads for the strait of Gibraltar.

Our only relevant map covered the entire Atlantic. Let's just say, we weren't getting any fine-grained details from it. I used it to guesstimate the coordinates of landmasses and shipping lanes, then finger poke them into the hand-held GPS. The intention was to get into deep water without hitting something, like an atoll, a ship, or possibly Africa.

The swells got bigger, steeper. We rose and fell, endlessly. Sometimes plunged, often lurched and crashed into wavefronts. Then came thick fog. It not only stole the horizon, but it also clung to everything like a wet towel and drenched us.

I was certain, we had run aground. I screamed from the helm. The boat was about to shatter on jagged basalt.

Elena scrambled for the cockpit, blinding me in the process. "What! What is happening?"

"We've hit rocks." What a stupid question! "Can't you see them, everywhere, all around and under us!?"

Huh? I shook my head -- hard. The sails were luffing, making a terrible racket, but we were OK. What a relief. "Sorry! I must have been dreaming."

"With eyes wide open!? No, you were hallucinating. Yolky matolky! Scared me to death." She paced around the cockpit, "How can I sleep now?" Then shot me a cold, hard stare of death. "Go to bed! I will wake you later."

Climbing below, I watched Elena take over. She had her hand over her torch, turning it into a glowing red ball. It's a good way to see in the dark without wiping out your night vision. She couldn't see me smiling back at her.

[Image 34-3] Elena and Meg's last glimpse of Europe, the island and lighthouse off Tarifa, Spain

I made coffee with the last of the freshwater. The tanks were dry and we were probably five days from the Canary Islands. Probably, because I didn't know where we were, or even if we would be allowed to land. I feared something was going to eventually get us, I just didn't know what, or when.

I joined Elena on deck with my precious coffee. She was sailing into a light breeze in heavy fog, happy to tell me about bioluminescent creatures she saw during the night.

I took the helm, steaming cup of coffee in my free hand.

Elena climbed to the boom and pulled a soaking facecloth from the bottom of the mainsail. She sponge-washed her face, neck and arms with it, then wrung it out over the side.

"Choomeechka! Watch." She ran the cloth along the bottom inside of the mainsail. The condensation collecting there got it good and wet.

"Hey, brill! I never thought--" The fog, more of a misty drizzle, made everything wet. Droplets hung from the rigging, the lifelines. Water ran down the sails in rivulets.

We soaked condensation from any reachable surface with clean cloths. It netted us a couple of pots of stale water a day.

On the off chance he was receiving, I sent our coordinates and intentions to Jon. Other than that, there was no point to keeping the satellite modem hooked up. Especially, seeing as I could use the electricity for something else; like trying to start the motor. I wired the solar panels' output directly to the isolated starter battery. Being the smallest battery on board, the trickle of electricity I could wring from nature might just charge it. The wind turbine was spinning uselessly in the breeze too, so I added its minuscule output to the mix. Then, we waited.

But, the instruments stayed dark. The electrical panel was dead. Nothing was charging. "Bollocks! We're right back where we were in Gibraltar." I cut the fuel. The motor died.

"Nothing, but sail 'til morning."

[Image 34-5] Nightfall through one of Boadicea's portholes, somewhere off West Africa.

With the zeal of a conspiracy-crazed UFO hunter, I got to work tracing circuits through parts of the boat no human, nor electrical conductor should ever be found. And, let me tell you, most boat wiring is harder to get at than those aliens they've got on ice at Area 51. My chicken-scratchings on damp paper led me to a humongous switch under our bunk. It's a charge-selector. Everything that makes electricity -- solar panels, wind turbine, engine alternator -- is wired into that switch. And, before you ask, no! It wasn't in the off position.

The wires leading to that switch were as thick as a broom handle and nearly as stiff. What I could see of them looked OK. But the main power lead ran under the house battery bank. That's under our bunk, and into the boat's, inaccessible nether regions. Impossible to see or get at without removing the house batteries -- which are probably called that because of how much they weigh. Lifting them out of their compartment bloody well wasn't going to happen in a small sailboat bobbing away at sea.

I did manage a colonoscopy on the main power cable by shoving Elena's tiny camera along it on a bendy stick. The video revealed a fuzzy, greenish-brown artefact suspended between two spans of the thick, red cable. Eureka! An in-line fuse. Too bad it was unreachable and really too bad it was submerged in the bilge during our various inundations. Electricity and seawater literally turned the fuse into a non-conductive ball of oxidised dirt. 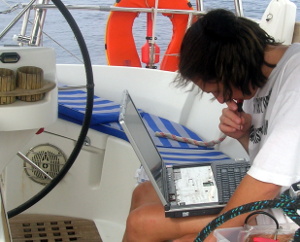 [Image 34-6] The sea air might have been good for Hercule Poirot but not for Meg's laptop.

I disconnected the main power lead from the rotary switch. Then I yanked it and the ball of corroded yuck into the crawl space under the cockpit. A flattened, Turkish-vegetable-medley tin became a new fusible link. Then, grunting and swearing in several languages, I pulled it all back under the batteries with a rope that I'd cleverly tied to the end of the cable before yanking it out.

"Arrrrg! Bollocks! Crikey on a stick! Why does this crap always happen to me? Just once! Just one sodding time. If something could--"

"Meg? Sorry to interrupt, but I forgot to open the fuel shut-off."

Elena cranked it over again. The starter groaned once, twice, and the motor came to life. "Yay! We did it!" The alternator put out a massive surge of current. The engine laboured under the load. "Thirsty batteries! More power, hurry! Throttle up!"

Beaming, tears on her cheeks, Elena pointed at the ammeter. Even the fuel gauges worked: about an eighth of a tank on each side. "We have diesel!" She pulled me close, kissing my cheeks, my ears. "Oh, Meg! We are really doing it. Everything is going to be all right now." In a bear-hug, she thumped my back with her fists. "I knew it. We can do anything. We are going to make it!" 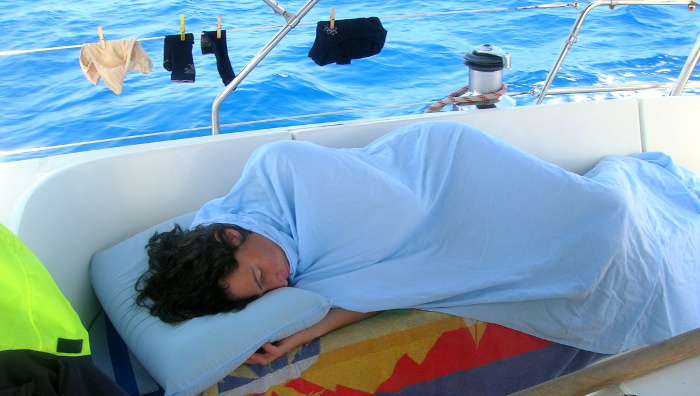 The further south-west we sailed, the drier the air became. Daytime condensation vanished entirely. Night watches produced little in cloth-harvested water. Bringing the electrical system back online provided another source of water: condensation from the evaporator in the fridge-freezer pit. It tasted like dirty socks but probably saved our lives.

With the batteries charged, the solar panels and wind generator kept up with our electrical needs. Electric light made sunsets less ominous, however, the desalination unit, the radar and the computer navigation systems remained unserviceable. An Atlantic crossing without those systems made me more than a little nervous.

I emailed our coordinates to Jon. Maybe he'd see that we were serious, would help with some navigation, at least.

That time we got a reply, a terse missive about not participating in our suicides. It also included navigation and instructions for a landing in Las Palmas, Canary Islands. 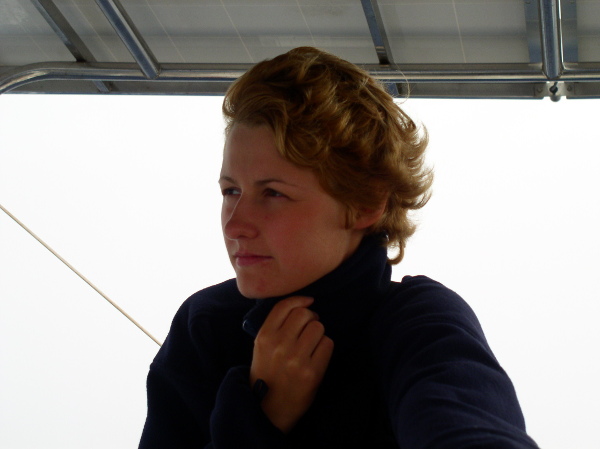